Jainism is said to be one among the oldest religions of India. Categorized as Svetambara and Digambara, this religion preaches about Lord Mahavir. There are 24 tirthankaras as per Jainism who are the pillars behind adding substance to Jainism. “ Live and Let Live” is the mantra that Jains follow. Though, Delhi has most of the Islamic heritage, the Jain Shwetambar Temple located at noisy Kinari Bazar cannot be left unnoticed. The shwetambar dresses in white which is a reflection of peace and purity. 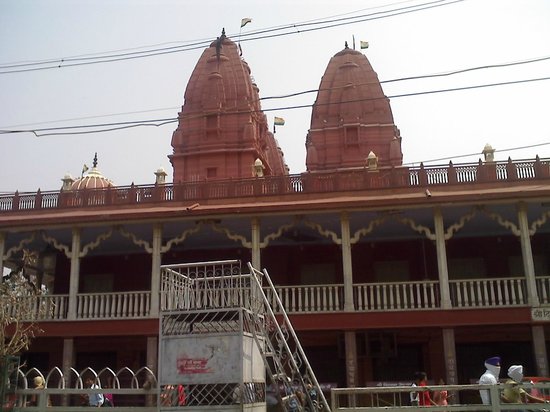 Once you step inside the temple, the priests in white will be performing the pooja and will be chanting the mantras. Finished with complete marble flooring, this Temple has intricate artwork and well decorated pillars. Divided into 3 floor, each floor has is dedicated to different Tirthankaras.Four giant chandeliers occupies the central hall which reflects the Mughal carving. The statue of Lord Parasnath,the 23rd Tirthankar of Jainism, is placed in the corner. The deity of the fifth tirthankara Sumatinath can be seen in the main sanctum. Adorned with silver crown, gold necklace and diamond Tilak, this statue reflects positivity and peace.

The second floor is entirely dedicated to portray the life of Lord Mahavir. The entire dome has pictures of dancers, musicians and nobles. At the ground floor is the museum, which has rare collection of manuscripts. One can see the gold and silver objects apart from understanding the Jain culture. The Chandni Chowk is the nearest metro station and the Temple timings are between 6.00 am to 8.00 pm.