From The Earth: National Agricultural Science Museum in Delhi

The National Agricultural Science Museum (NASM for short), is located in the National Agricultural Science Centre campus of ICAR (Indian Council of Agricultural Research) in the Capital city. The two storey building has been specially designed and has a massive floor space of 2137 square meters. The reason for it being made in such a manner is to better portray the development of agriculture in India through the ages, from the prehistoric era to the present generation and also shows the possibilities of agricultural innovations in the near future. Agriculture is rather important in India because of various reasons. First of all, it has the one of the largest area of arable land, 159.7 million acres, in the world. Only the U.S.A has more. Around 50% of the working population is involved with agriculture while close to 70% of the total population depend on it for their livelihood.

Also, India has been involved with agriculture for the longest time, dating far back to the days of the Indus Valley Civilisation, while certain areas of South India even predates this. It's no wonder that agriculture is given a lot of importance in this country. Fun fact: this subcontinent was quite the possibly the first one to have candy, with the population back in 500 B.C. having already formulated a technique of extracting sugar to form crystals from Sugarcane plants.

Post Independence, agriculture was always on the forefront of 5-year plans rolled out by the government. This lead to India becoming self-sufficient with food production, something that was rather important, seeing as India is the 2nd most populated country on the planet. All, this has been meticulously explained and displayed in the National Agricultural Science Museum in the form of various exhibitions. These exhibitions have been divided into ten different sections so as to make the topic easier to grasp. The Sections are as follows: 6 Pillars of Agriculture, 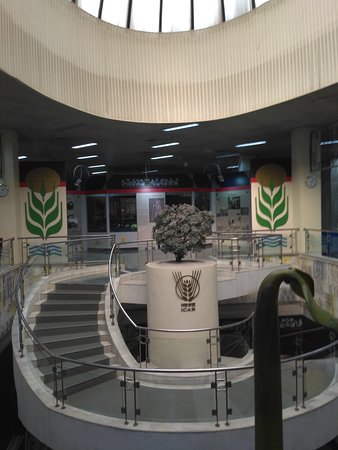