Known for all things Korean, Gung The Palace is located in Green Park in South Delhi. Frequented by the whos-who of the Korean community in Delhi NCR, this restaurant serves some of the best Korean food in the city. This Korean speciality restaurant is housed in a three floored building, with each floor offering a different kind of seating. The interiors have an oriental feel to them and their walls have framed pictures of celebrities and high ranking officials who've all feasted there.

The service is top notch and the staff make sure to make you feel at home. Karma and I ordered the Samgyeop Sal (barbequed pork belly) and Kimchi Jigae (kimchi stew). We knew we were over ordering but both these dishes were super tempting and we decided to take the risk (seeing from our photos you can see that we still had some Kimchi Jigae leftover and some rice as well. Apologies for the wastage, I do hate myself for it). 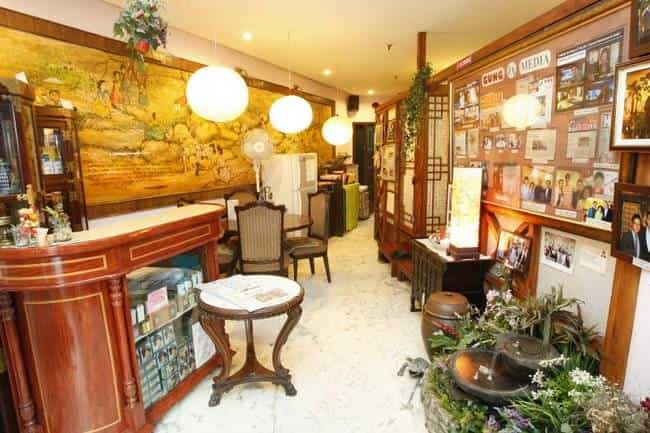 They gave us the option of having the Samgyeop Sal barbequed in the kitchen or at our table and we opted for the latter, so as to help build up our appetite for the monumental task that lay ahead of us. We could have barbequed the meat ourselves but seeing as they knew how to do it better, we let the waitress attending out table do the honours. As she began laying the thin slices of pork belly on the hot metal, the sizzle of the burning meat got us excited. Along with the sweet smell of melting fat, our appetites had reached their pinnacle.

As we waited for the barbeque to cook, we warmed up by taking bits of the side dishes, savouring each bite. In just a few minutes (that felt like ages), the pork belly was ready and we dove right in, head first. As we ravaged on the Samgyeop Sal, the Kimchi Jigae appeared on the horizon. At first, we thought we would not be able to finish either of the dishes but with the memory of the hungry nights that we had endured during boarding school, we took on the remaining barbeque with renewed vigour and welcomed the kimchi stew with open arms.

Fifteen minutes later, the battlefield was a mess with remnants of the Samgyeop Sal, while the fight with the Kimchi Jigae was still on.  I had reached my limit and put down my weapons, yet Karma continued in the epic Man vs Food session. Staggering, he chomped down spoon after spoon of rice and slurped on that delish stew. But just 5 more mins later, even he was defeated. With the Kimchi Jigae still standing, it was clear who had won this battle. Suffering from overeating, both of us, though defeated, was not in the least bit sad, as the meal in itself was quite a treat. With bloated stomach and wide smiles, we asked for the bill. As we lightened our wallets and stumbled out of the front door, we knew that we might have lost the battle but the war was yet to be won. Also, why did they ever stop airing Man Vs Food? That was one of my favourite tv shows. On a more serious note, head over to Gung The Palace if you're looking for some Korean love (the edible kind, as in the one that gives you biological nutritional content).